There will be lots of Xiangqi action at Kennedy Square (Highway 7 and Kennedy) to celebrate the Lunar New Year. 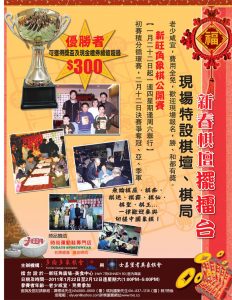 The TXA and the Scarborough Seniors Club are organizing the 2011 Kennedy Square Xiangqi Open, a free tournament that you can play in. Or you can come out to watch, play casually, and enjoy the New Years atmosphere of one of Toronto’s best Chinese malls.

Below is our press release. The rules and contact information are further down. See you there!

To celebrate the coming Chinese New Year, the 2011 Kennedy Square Xiangqi Open is set for January 22.

Jointly organized by the Toronto Xiangqi Association and the Scarborough Seniors Chess Club, the tournament will take the form of a 6 rounds of Swiss tournament, to be held on three Saturdays – January 22, 29 and February 5 (2 games per week), followed by final matches for first and third place on February 12. All rounds begin at 1 pm at the New Kennedy Square Mall (8360 Kennedy Road. Markham, HW7 and Kennedy Road).

The tournament is open for any Individual. Top three finishers will be rewarded with trophies and cash coupons. In addition, there will be Xiangqi Master and end game puzzles challenge every Saturday. Prior registration is welcome. Or just drop by, and we’ll introduce you to one of the world’s great games. The cost of entering the tournament is free, all are welcome.

Here are the rules for the event:

Presentation: Awards Presentation on February 12 right after the final matches

This entry was posted in Past News, TXA News and tagged New Kennedy Square Open. Bookmark the permalink.