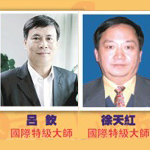 Two of China’s greatest xiangqi players will challenge some of Toronto’s best when they visit the city at the end of the month.

[singlepic id=121 w=207 h=320 float=right] Both of these exhibitions will take place between 12 p.m. and 6 p.m. on May 27 at New Kennedy Square near Kennedy and Highway 7. All are invited to come and watch. Challengers who win or draw will receive cash & prizes worth more than $2,000.

The event will include a special programs, “Chess & Life”, by Mr. Wan Cedel. After the exhibitions, there will be a farewell dinner for the GMs at 7 p.m. at the Mong Kok Chinese Restaurant (also at New Kennedy Square).

During their Toronto visit, the GMs will also give press interviews, attend a number of dinners and brunches, and visit Niagara Falls. The grandmaster visit is jointly organized by the Toronto Xiangqi Association and the Scarborough Seniors Club.

Below is the GMs’ Toronto itinerary, followed by summaries of their accomplishments. Here in pdf form is the Chinese Team Visit Program. The image above right is the event poster; click on it for a larger version.