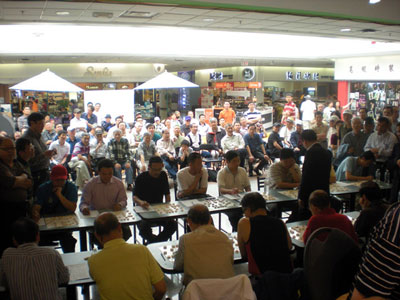 Two of China’s greatest grandmasters wowed a large, enthusiastic crowd at New Kennedy Square on Sunday in what was likely the GTA’s largest Xiangqi event ever.

Although none of Toronto’s players succeeded in felling a GM during the World Champions Challenge Exhibition Games, they did come away with five draws. 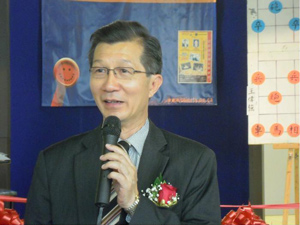 The games played by GM Xu as well as the three draws conceded by GM Lu can be viewed at WXF.org in both Chinese and English.

The dignitaries in attendance at the World Champions Challenge included Michael Chan, Ontario Minister of Tourism and Culture, and Markham Regional Councilors Alan Ho and Gordon Landon. Shi Xiaoguang, a consul from the Chinese Consulate-General in Toronto, attended a dinner held in honour of the GMs at the Mong Kok Chinese Restaurant. 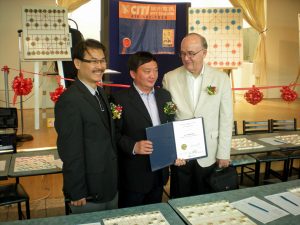 Xu TianHong is presented with a certificate of welcome from Markham Mayor Frank Scarpitti by Councillors Alan Ho and Gordon Landon.

The two former world champions were gracious guests and diplomats, mixing with the audience, praising the players who drew with them, and posing for many pictures. GM Xu explained his games for the audience after his exhibition, and at dinner unveiled a large message of greeting from his native Jiangsu that featured the Chinese character for “Dragon” – see the gallery below.

The TXA and Scarborough chess club are very grateful to the event’s sponsors:

The World Champions Challenge Exhibition Games event was presented by the TXA and the Scarborough Seniors club. It was organized by TXA president Elton Yuen in partnership with Raymond and Amy Lam. The TXA thanks Raymond and Amy for their valuable assistance and enthusiastic participation.

Chinese news coverage of the event can be read at: