Jointly organized by the Toronto Xiangqi Association and the Scarborough Seniors Chess Club, the 2012 Toronto Xiangqi Open is set to start on Sunday July 8 and continue for four straight Sundays.

This year the trophy is named the “President Memorial Cup” as a tribute the Toronto Xiangqi Association’s greatly respected co-founder and Vice President, Mr. Lee Kwok Cheung who passed away in April.

The tournament will take the form of a 7 round Swiss system tournament, to be held on three Sundays – July 8, 15, and 22 (2, 3, 2 rounds per week), followed by final matches for first and third place on July 29. All rounds begin at 1 pm at the New Kennedy Square (8360 Kennedy Road. Markham, HW7 and Kennedy Road).

The tournament is open for any individual. Top three finishers and the top senior player will be rewarded with trophies and cash coupons. Prior registration is welcome. Or just drop by on the first day of the tournament, and we’ll introduce you to one of the world’s great games. The cost of entering the tournament is free for members and $10 for non-members, all are welcome.

The Toronto Open Championship is a tradition dating back to 1978. It gives players from throughout the GTA the chance to meet and play against the city’s leading masters.

To register or inquire about the Toronto Xiangqi Open, please contact Mr. Li, Hanqi by phone at +1 (416) 587-6818 or email Elton Yuen at mailto:elyuen@yahoo.com.

Information about the 2012 Toronto Open will be posted at TXA.ca and WXF.org. 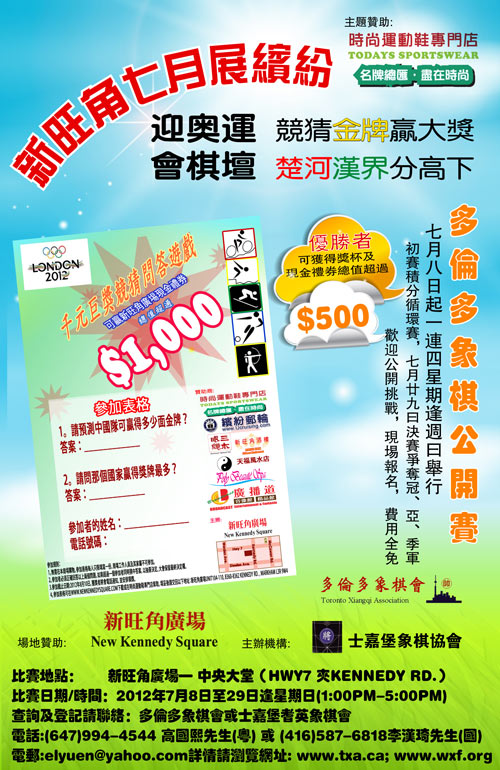