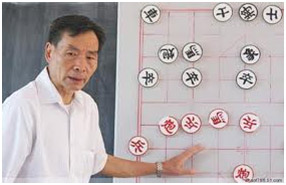 One of the greatest players in Chinese chess history will spend the first 10 days of October in the Toronto area, meeting local players and giving them lessons.

Grandmaster Cai FuRu was one of the strongest player in Guangdong province, a chess hot-bed, in the 1960s. He fell short of winning the Chinese national championship due to the absolute domination of Shanghai’s Hu RongHua during this period. He later became coach of the Guangdong team and a national referee.

Grandmaster Cai will be the third Xiangqi legend to visit Toronto in 2012. Former world and Chinese champions, Lu Qin and Xu TianHong, visited the city in May. All three were invited jointly by Toronto Xiangqi Association and the Scarborough Seniors Chess Club. 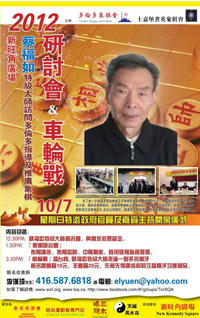 Between October 1 and 10, Grandmaster Cai will appear on the radio and visit Markham and Casino Rama in Orillia to promote and teach Chinese chess. The highlights include:

Inquiries can be made by telephone to Mr. Li HanQi (416 587-6818)  or by email to Elton Yuen at elyuen@yahoo.com. For more information, please go to WXF.org or watch this site.

Cai FuRu was born in 1939 in Guangzhou, the capital of Guangdong Province in Southern China. In his heyday, his all-out attacking style earned him the nickname, “The Lord of Guangzhou”.

He learned Xiangqi from his father at the age of 8, and joined the Guangdong Province team in 1958. In 1960, he played in China’s national championship for the first time, placing sixth. He was a key member of the GuangDong team that won China’s fourth national team championship. His brave and fierce playing style gave him a reputation as a “bully”, and his influence spread like wildfire in Guangzhou.

Cai FuRu became coach of the Guangdong in 1983, and helped to train a number of China’s greatest players, including former World and Chinese champions, Lu Qin and Xu YinChuan, and former World and Chinese woman’s champion, HuangYuYing (who now lives in Toronto). He received the title of grandmaster in 1998 in recognition of his great playing strength during his prime.

This entry was posted in Past News, TXA News and tagged Cai FuRu. Bookmark the permalink.