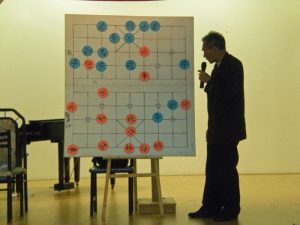 In October, Grandmaster Cai FuRu, a Xiangqi legend, spent 10 days in the GTA. He visited Markham, Scarborough and Orillia, giving lectures and demonstrations of his legendary skills.

GM Cai is one of the architects of the modern game. His fierce attacking style has been widely influential in his native Guangdong Province.

He was a member of the Guangdong team when Xiangqi officially became a sport in China in the late 1950s. He played in the famous 1960 Chinese individual championship, when Hu RongHua one the first of his 10 consecutive Chinese championships. In the years that followed, he both won and lost brilliant games against GM Hu.

In the 1980s, he became the coach of the GuangDong team, and led them to many championships. His playing career continued into the 1990s.

On October 7, he spent an entire day at New Kennedy Square, mingling with players and fans, posing for pictures, and in the afternoon, giving a lecture and simultaneous exhibition before a large, enthusiastic audience. He faced eight players and conceded one draw, winning all the other games with the sharp attacking skills for which he is famous.

A selection of GM Cai’s games can be found in the WXF.org Xiangqi Master Database. We highly recommend them. (In the database, choose “All Players” and then id# 41 for GM Cai.)

More pictures of GM Cai’s visit to the GTA can be found on the TXA Facebook group.