Orillia gives Toronto all they can handle

In the New Mong Kok Cup Inter-City Xiangqi Championship , played on the last two Saturdays before Christmas, the Toronto Xiangqi Association had to come from behind to beat a team of tough young players from Orillia.

Each team was comprised of six players, each of whom played all six players on the other team.  WXF rules were used; the players began each game with 45 minutes on the clock, and received 30 seconds for each move played. 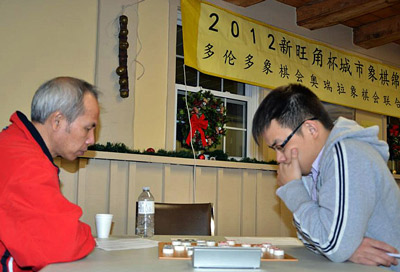 The Orillia Xiangqi Club is led by players who work at Casino Rama. Their club president is Gary Li GuoLiang 李國梁 and their top player is Richard Li YaChao 李亚超, the 2009 Toronto champion. Quite frankly, it is remarkable that they have succeeded in putting together such a strong team.

The first three rounds of the match took place on December 17 at the Orillia team’s clubhouse, at a beautiful location near the shore of Lake Simcoe.

It was a rough afternoon for Toronto. Orillia came away leading 20: 16 (two points for a win, one for a draw). Li YaChao and Toronto’s Mark Wang WeiQiang 王伟强 (the 2011 and 2012 Toronto champion) each won all three of their games.  Lin ShiXiong 林世雄, the 2010 Toronto champion, lost two games,  one of them to Li YaChao, and then very calmly drove two of his team-mates back to Toronto through an ice-storm. 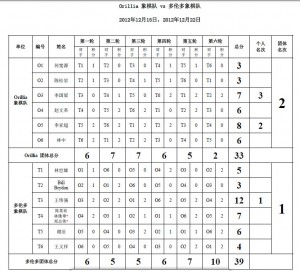 The match completed on December 23 at New Kennedy Square in Markham, the TXA’s home base. Orillia fought hard; the match was tied entering Round Six, with Orillia holding the advantage due to a likely win in a fourth round adjourned game between Li YaChao and Bill Brydon (one of my most exciting and enjoyable games ever).

In Round Six, Toronto finally asserted itself by winning five games. The final score was 39-33. Click on the image to the right to see the results of all the players (in a new tab or window). Watch the Xiangqi Master Database at WXF.org for game records.

Wang WeiQiang won all six of his games, and is now clearly one of the best players in Canada. Orillia outscored Toronto in all the other games. Li YaChao was the event’s second highest scorer, with 8:12. Gary Li stood third with 7:12.

Both sides want to hold a second Inter-City Xiangqi Championship at the end of 2013, and would like to include more teams. The TXA hopes to see all of the Orillia players in the Toronto Championship this summer.