Toronto’s first-ever speed Xiangqi tournament took place on February 17, during the early days of the Year of the Snake. Three veterans finished with 5/6, forcing the organizers to use Buchold (tie-break) points to determine the prizes.

The event was more than a new year’s festivity. It was held in honour of TXA founder Peter Sung, whose 65th birthday was celebrated after the tournament. 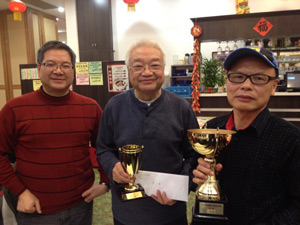 Zhiwei Zheng 鄭志偉, who placed first on tie-break, receives his trophy from Elton and Peter.

The tournament was jointly organized by the Toronto Xiangqi Association and the Scarborough Seniors Chess Club (SSCC). It was held at New Kennedy Square, which is now the tournament’s home base. It took the form of a six-round Swiss, with each player receiving 15 minutes plus 10 seconds a move for the entire game.

The age-range of the 28 participants spanned more than 70 years. The field included two children who are learning the game, and also Edmond Chow, now 85, a long time member of the SSCC who has achieved a number of good results in the Toronto championship including third in the year 2000.

After the tournament, a dinner in Peter’s honour was held at the New Mongkok Restaurant in New Kennedy Square. Among the guests were former World Women’s champion Huang YuYing, former Toronto champion, Stephen Fung, and their two children.

Here, in PDF form (opens in new window), is an in-depth report on the tournament Chinese by Andy Chan 陳晃祐which includes results tables.