We regret to say that the Jiangsu team’s visit to Toronto has been postponed, and the July 13 event described below has been cancelled.

A press conference scheduled for 2.30 p.m. Saturday July 6 at the MongKok Chinese Restaurant at New Kennedy Square will still go ahead.

The illustrious grandmaster, Xu Tianhong (徐天红), is returning to Toronto in July, accompanied by two other leading players from his home province of Jiangsu. The three will exhibit their skills at New Kennedy Square at 1 p.m. on Saturday July 13.

Grandmaster Xu won the Chinese individual championship in 1989 and the world championship in 1993. On his last visit to Toronto, in May 2012, he played simultaneously against three Toronto champions plus Bill Brydon. He will be accompanied by: 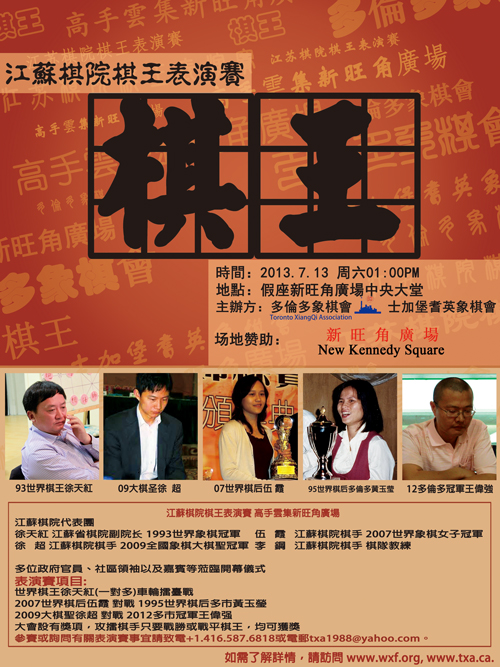 Jiangsu Province is on the east coast of China, to the north of Shanghai, and includes the famous cities of Nanjing and Suzhou.

Huang will be joined on stage by Mark Wang WeiQiang (王伟强) winner of the last two Toronto championships, and currently the city’s top player. He will take on Xu Chao.

GM, making his third visit to the GTA, will play a simultaneous exhibition against an undetermined number of players. Prizes will be awarded to players who succeed in beating or gaining draws against the grandmaster.

The event takes place on Saturday July 11, beginning at 1 p.m. It is jointly organized by the Toronto Xiangqi Association and the Scarborough Senior’s Chess Club. For more information, please call 416 587-6818 or email txa1988@yahoo.com.

One Response to Grandmaster Xu Tianhong to visit Toronto with Jiangsu’s top players; Huang Yuying to come out of retirement