Our third speed Xiangqi tournament of the year will take place in Barrie on September 29. All are welcome to come and play or watch. 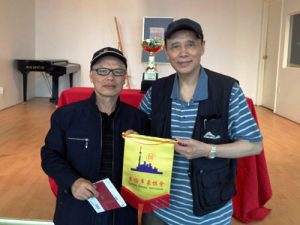 Zheng ZhiWei won our first speed tournament in February, finished third in June, and was runner up in the 2013 Toronto Open

The tournament will likely be a 7-round Swiss tournament beginning at 1 pm. and finishing around 6 p.m. Dinner at a restaurant will follow. The time control will be 10 minutes per game plus an increment of 5 seconds per move. Each player will be required to give a $10 deposit which will be returned after the tournament.

Some of the Toronto players will have Dim Sum at the New Mongkok restaurant in New Kennedy Square in Markham and will depart for Barrie at about 1 p.m.

Our second speed Xiangqi tournament of this year (and also ever) was held in June. It fell through the cracks and was never announced on this site. Our apologies for dropping the ball. Readers are encouraged to watch our Facebook page, which has more immediate information.

The June tournament was won by Toronto champion Mark Wang WeiQiang (王伟强) with a score of 6/7 – six wins and one loss. This means that his subsequent third straight Toronto title was his fourth tournament victory in three years.

Four players finished with 5/7, and were placed in order using tiebreak points as follows: 2) Zhang Shanhang (張善行), the only player to beat Mark; 3) Zheng Ziwei  (鄭志偉), who won our first speed tournament on tie-break, and who went on to take second in last month’s Toronto Open; 4) Xia Shuoming (夏守明) who also finished fourth in the first speed tournament; 5) Boris Guo Lei (郭磊).

Below is a gallery of images from the event, and below this the cross-table. 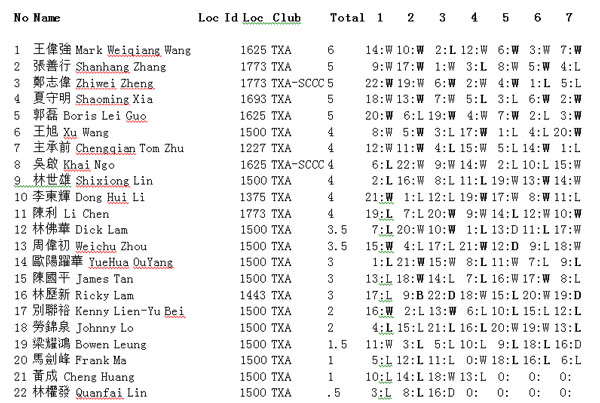