Jiangsu team displays overwhelming power but coughs up a game

The top Xiangqi players from China’s Jiangsu Province kept their promise and visited Markham on Saturday (September 21). A large portion of the GTA’s most avid players were waiting at New Kennedy Square. 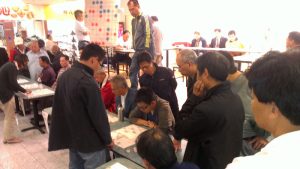 Xu Chao lost this one game to Li YaChao

The resulting three versus 30 showdown produced, as expected, a lop-sided victory for the visitors, but also a rare win for the home team. This came after 2009 Toronto champion Richard Li YaChao got behind Master Xu Chao (徐 超)’s defences, eliminated his advisors with a horse sacrifice, and forced mate with his chariots. Master Xu defeated nine other opponents in fierce attacking style.

Up on stage, former World and Chinese champion, Xu Tianhong (徐天红), also won nine games, but was held to a draw by Zheng Ziwei (郑志伟), who was runner up in the recent Toronto championship, and has also won one of this year’s speed tournaments. Grandmaster Xu gave up a piece to break down Zheng’s sturdy defense, but could do no better than to win back the piece. The grandmaster’s victims included 2010 Toronto Champion, Lin Shixiong (林世雄), who drew with him during his 2012 visit.

Grandmaster Wu Xia (伍霞), the 2007 World Woman’s Champion, played a greater number of endgames, and required more time. She won six games, and four were abandoned as draws, one against Wang Hongwei (王紅偉) who finished fourth in the 2013 Toronto Open.

In all, these three great players finished with a score of 26.5 out 30, in thoroughly entertaining fashion. After the exhibition, we all went for dinner at the New MongKok Chinese Restaurant. The Jiangsu players autographed books for the players in the exhibition, but had to leave early to catch an evening flight. They’ll be welcome back any time.

Below is a photo gallery of the exhibition. On the September 7-8, the Toronto Xiangqi Association participated in the 2013 Shufa Exhibition of Chinese calligraphy at the People’s Christian Academy in Markham. The exhibition also included Chinese music and dance. A few pictures are in the gallery below.