Since this post was written, our fourth speed tournament of the year has been completed. The tables below now show the final field for the December 22 Toronto Speed Open Championship Final and the top prize winners for all four tournaments. Paul Ng 吳嶽林 will not be able to play in December; his place will be taken by Shuoming Xia夏守明. 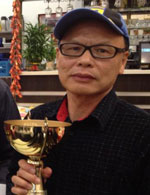 Mark Wang (above), and Richard Li

Our popular series of speed Xiangqi tournaments have turned into a “Grand Prix” competition. The eight top players from four 2013 tournaments, one for each season, will meet in December to determine an overall champion.

Here are the results of the three tournaments that have been held so far, won by Zhiwei Zheng 鄭志偉, Mark Wang WeiQiang 王伟强, Richard Li YaChao 李亞超.

These three, plus runners-up, Zhang Shanhang 張善行 and Paul Ng 吳嶽林. Since Zhang has been first runner-up twice, at least one second runner-up will qualifier for the December final. Our fourth speed tournament, to be held in November, will determine the full field. Watch this site and our Facebook group for the dates and locations.

Below are tables with the winners and qualifiers so far. We will update them when the November results are available.