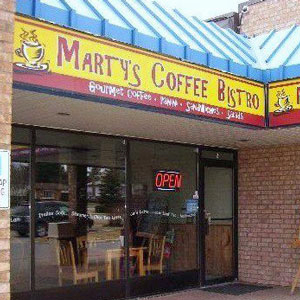 Our second Speed Xiangqi tournament of 2014 will take place on May 25th at Marty’s Coffee Bistro in Barrie. This was the venue for our 2013 Fall speed tournament, which was a big success.

A total of four open Speed Xiangqi tournaments will be held this year (not including the annual “slow” Toronto Championship). Two players from each will qualify for a championship final in December. The series is jointly organized by the Toronto Xiangqi Association and the Scarborough Seniors Chess Club.

The exact location for the tournament is:

For those who would like transportation from Markham, cars will be leaving at 10 a.m. May 25 from:

All are welcome to play in this tournament. Play will begin at 1 p.m. If you’re coming by car, please arrive early.

The tournament will take the form a of a six round Swiss and will probably end around 6 p.m. The awards (including cash prizes) will be given out during dinner at a restaurant; all are welcome.  The cars will return to Toronto around 9 p.m.

The entry fee for the tournament is free for TXA/SSCC members and $10 for non-members (the same cost as a membership) and $5 for those who bring others by car. For those who get rides from the Richmond Court Restaurant, the cost for transportation and meals, including dinner, is $40.