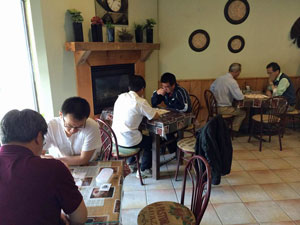 Play in progress and Marty’s Coffee Bistro in Barrie

Mark Wang WeiQiang 王偉強 demonstrated that he is clearly the GTA’s top player by winning our second speed tournament of the year ahead of three former Toronto Champions and the winner of this year’s first speed tournament.

Mark Wang and Lin ShiXiong have now qualified for the 2014 speed Xiangqi final, to be held in December.

The tournament was jointly organized by the Toronto Xiangqi Association and the Scarborough Seniors Chess Club. It was held at Marty’s Coffee Bistro in Barrie on May 25.